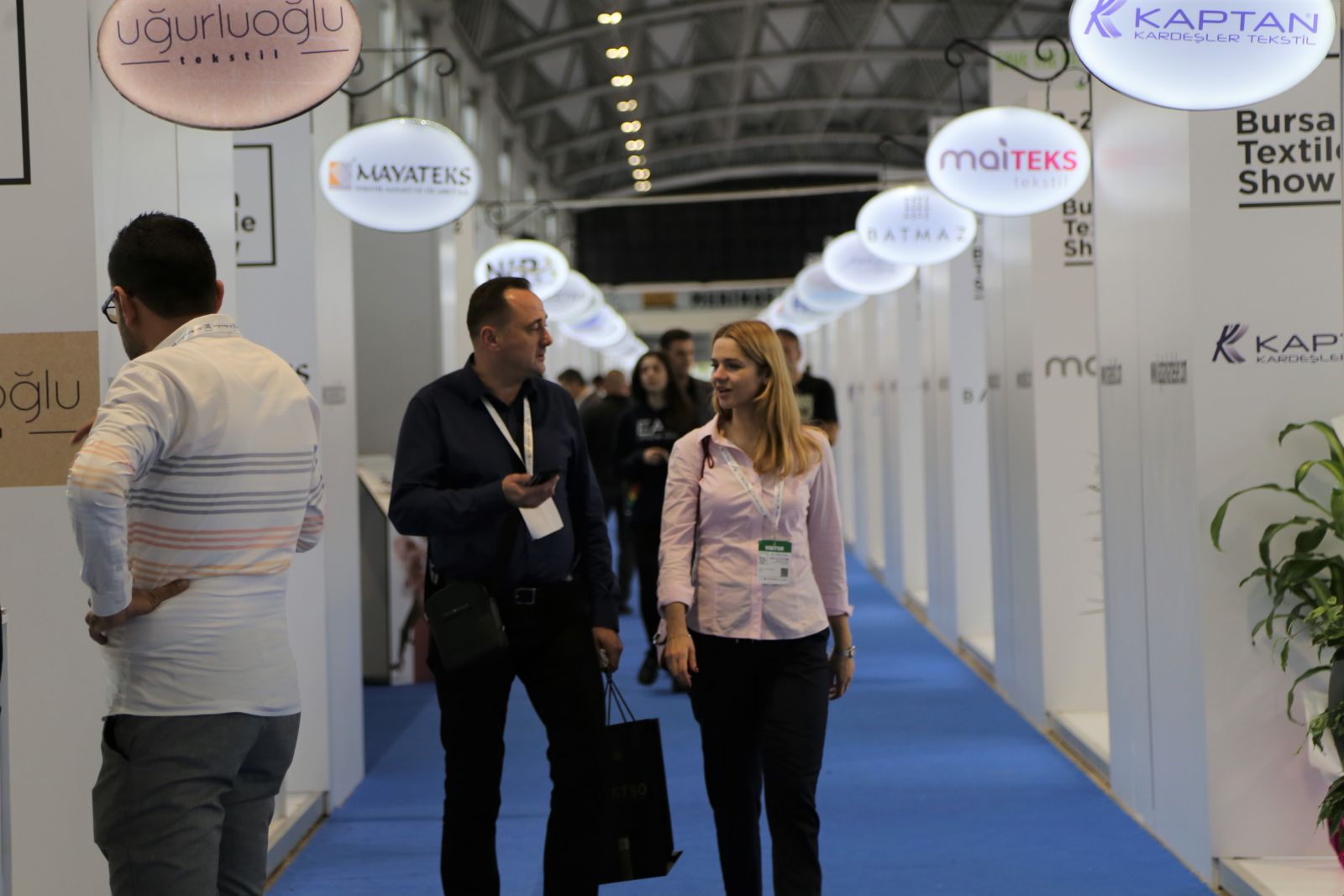 Bursa Textile Show, which was organized this year for the first time ever with the leadership of Bursa Chamber of Commerce and Industry (BTSO) and with the support of Uludag Textile Exporters’ Association, has succeeded in meeting the expectations of the representatives of the sector. The exhibition where firms of Bursa carried out over 5,000 interviews with around 350 foreign buyers from over 40 countries created a platform for important co-operations.

Bursa Textile Show which was organized by BTSO and which brought together leader players of the sector in Bursa received two thumbs up from the participators and foreign visitors on its first year. At the exhibition where over 80 firms opened stands, exhibiting their 2019/2020 autumn/winter fabric collection, trend and fashion setting high quality products of Bursa received great attention from visitors.

BTSO Vice President of the Board of Directors İsmail Kuş said that they had carried out four different procurement committee activities within the framework of Textile Product Development project conducted by BTSO and with the support of the Ministry of Commerce. Vice President İsmail Kuş stated that they brought almost 1000 foreign buyers to Bursa with their procurement committee activities, enabling them to have bilateral meetings. He also added; this year, for the first time ever, the event was organized in an exhibition format. Kuş expressed that over 5,000 business interviews took place during the exhibition. Kuş, remarked that every company which joined the exhibition carried out 60 interviews on average. He also underlined that almost 50% of the interviews had the potential to have a positive result.

IT BROUGHT STRENGTH TO THE SECTOR

Vice President İsmail Kuş underlined that the Bursa Textile Show exhibition brought an important synergy to the textile sector and added: “It was an important deficiency not to have an exhibition organization in Bursa targeted at the sector which is known to be the capital of textile. Our companies usually attended the exhibitions in Istanbul or abroad. It is very valuable for the future of the sector for us to start such an organization in Bursa. I thank all our firms who participated in our exhibition.”

THE RESERVATIONS FOR THE NEXT YEAR HAVE ALREADY BEEN MADE

Engin Alemdar, President of BTSO’s 39th Professional Committee and Fabra Textile’s Chairman of the Executive Board said that important business connections were established at the exhibition where qualified buyers joined. Engin Alemdar also remarked: “Everything went much better than planned. It has been a spot-on exhibition. In addition to the 350 foreign buyers who joined the exhibition with the organization of our Association and the Ministry of Commerce, there had been foreign buyers who came to Bursa by their own means. A lot of firms have already promised that they would participate in the exhibition we are going to organize for the 2nd time next year in April.”

“FOREIGN BUYERS HAVE BEEN CORRECTLY IDENTIFIED”

Firms who joined the exhibition were pleased with the great interest especially from the foreign buyers. Ventsa Textile General Manager Semih Kaynar, mentioned that Bursa Textile Show has been very beneficial in the promotion of the potential of the sector. Kaynar, stated that he believed the exhibition would reach even better places in the upcoming years and he added: “The exhibition was organized with a very meticulous and a regular approach. The exhibitions we joined abroad aren’t successful organizations of this scale. Moreover, BTSO invited the most correct foreign firms to this exhibition. I believe with the companies we got in touch with thanks to this exhibition, we will be able to do business for years. I thank everyone who has contributed to this organization.”

Aziz Azizoğlu from Ayazmalı Textile stated that their firms conducted exportation for the first time thanks to their procurement committee activities led by BTSO and added: “We have conducted our first exportation activity with Romania as a firm. It has been a significant experience for us. Hopefully it will be a good example for our other companies. Bursa Textile Show is an extremely important organization. We have witnessed from European countries that there has been a great interest for the exhibition. This has pleased us extremely.” Kerim Tanık from the Satenteks firm expressed that foreign customers who joined Bursa Textile Show had the potential to be direct buyers and that the exhibition would open new exportation doors for the firms.

FOREIGN VISITORS LEFT THE EXHIBITON PLEASED
Business people from Columbia, India, Peru, Mexico, Brazil, South Africa, Brazil and Canada participated in the event to which countries like Russia, Belarus, Serbia and other European countries showed great interest. Amelia Rosa Visser who joined the exhibition from Cape Town, South Africa stated that it was her 2nd time in Bursa and added, “I participated in the bilateral business meetings event held last year in March. Since I was impressed by the products I saw there I wanted to join Bursa Textile Show this year, too. It has been an extremely exciting experience. I will keep visiting this exhibition in the upcoming years.”  Diana Walkiewics who joined the exhibition from Poland underlined that the exhibition was very well organized and remarked: “Even though it was a smaller exhibition compared to Paris, we were able to find everything we needed. Bursa has textile products that are of high quality and of a reasonable price.”